A few years ago, I hosted large Thanksgiving gatherings two years in a row.  I cooked two turkeys each year, one in a traditional Weber Kettle grill and one in a Weber Bullet Smoker. 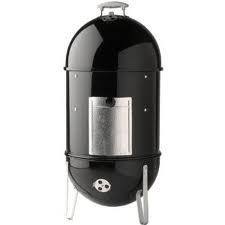 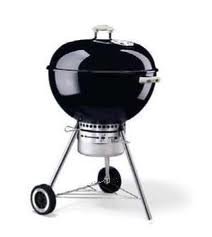 I purchased two fresh, non-frozen turkey that were around 12 to 13 pounds.  (If you buy a frozen turkey, let it defrost for a couple of days in the refrigerator.)  Turkeys this size cook more evenly over charcoal than larger birds without drying out.

The night before cooking, rinse the turkey thoroughly. Remove the neck and bag of organs. Prepared a brine by mixing 1 gallon cold water, 1 cup pickling salt, and half a cup of brown sugar. Put the turkey in a trash bag inside a bucket, added the brine mixture, and add just enough water so that the bird is completely covered. The trash bag makes it easier to keep the turkey submerged with less additional water. Place the bucket in the refrigerator over night. 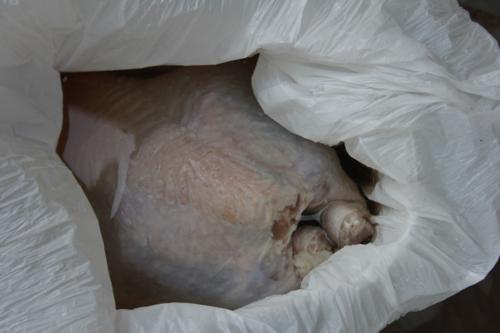 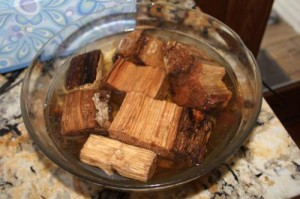 I use Hickory wood chunks. I prefer the flavor of hickory over mesquite, which can be a bit heavier. I prefer chunks over chips because they burn more slowly, providing a more subtle smoke over a longer period of time. Soak the wood chunks for an hour before starting the charcoal. So aiming for a 3:00 Thanksgiving dinner, I started soaking my wood chunks at 9:00 for the smoker and 11:30 for the grill.

I used the Minion Method for lighting the smoker. At 10:00, I lit a full chimney of charcoal, and filled the bottom of the smoker with unlit charcoal (both new and used) with a hollowed-out valley in the center. I opened all three bottom vents to 100%, where they stayed the entire time.  While the charcoal was heating, I prepared the turkey. 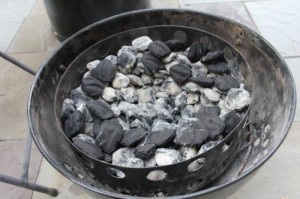 I started a chimney of charcoal at 12:15. I set the Weber Kettle up for indirect heat.  I added a drip tray in the center, which I partially filled with apple juice to steam and flavor the turkey.  While the charcoal was heating, I prepared the turkey. 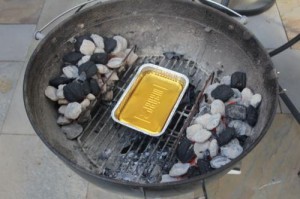 Once I lit the charcoal for the grill or smoker and was waiting for it to be ready, I rinsed the turkey inside and out and dried it off. I melted half a stick of butter and brushed the melted butter over the entire surface of the turkey, top and bottom. I put some onion chunks (about a quarter of an onion) and a couple of cloves of garlic into the bird’s cavity. You don’t stuff a turkey you’re cooking over charcoal, but a few veggies in the cavity add a nice flavor. 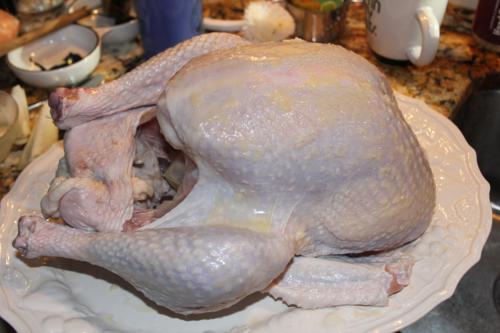 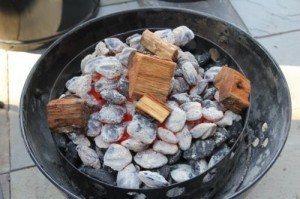 I assembled the smoker, putting two thirds of a bottle of apple juice in the water pan along with a pitcher of cold water. I placed a foil drip pan on the bottom rack. I placed the turkey on the top rack, breast-side up. I opened the top vent to 100% and put the lid on the smoker. I closed the lid at 10:25.

A few minutes before 12:45, the charcoal was ready. Using indirect heat, I put half the charcoal on each side of the grill and added about 8 briquettes on each side. I placed a drip pan in the middle and put about a third of a bottle of cheap apple cider in the pan. I put 3-4 soaked Hickory chunks on top of the burning charcoal.
I placed the turkey breast-side down on an oiled roast rack. Cooks Illustrated argues that turkey ends up moister when grilled breast-side down for the first hour. I’ve never challenged this assertion, and I’ve always been happy with the results. (See “Foolproof Turkey on the Grill”, from Cooks Illustrated in the November/December, 1999 issue. It’s worth the effort to track down the article and study it.) I closed the lid at 12:45. 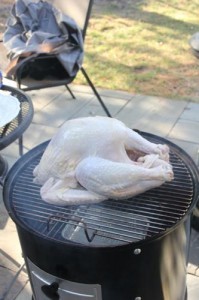 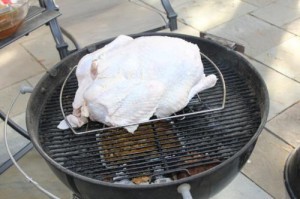 I had the all vents open all the way the whole time I was cooking the turkey. I tried to track the temperature in the smoker, but discovered that the thermometer I used was not even remotely accurate.

At 1:30, I added some more wood chunks to the smoker. Nice wet wood chunks, right in the middle of the fire.

At 2:30, I opened the lid of the smoker long enough to insert the electronic thermometer probe into the turkey. The temperature of the turkey was 165° on the dot. I removed the turkey and covered it with foil to rest while we finished preparing the rest of the meal. 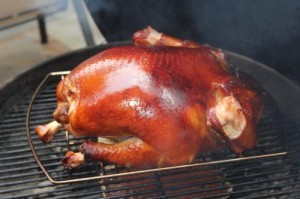 At 1:45, I opened the grill. This is what I saw. I added about 8 to 10 charcoal briquettes to the fire on each side of the grill, and added a couple more soaked wood chunks.
I then carefully, carefully flipped the turkey over, so it was breast side up. I closed the lid. 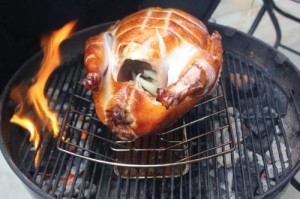 At 2:30, I opened the lid just long enough to put the probe of an electronic meat thermometer into the turkey. The initial meat temperature was 160°. 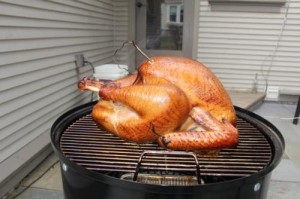 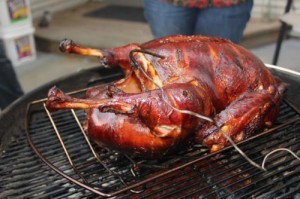 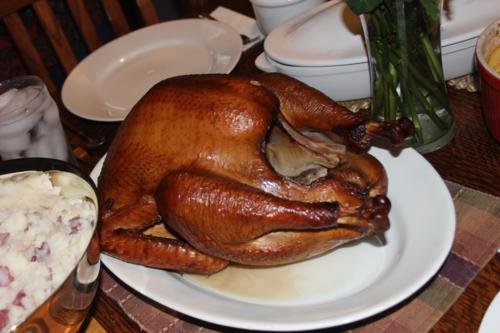 The smoked turkey had a perfect golden brown skin. The meat was moist and smokey and very flavorful. It was fantastic. 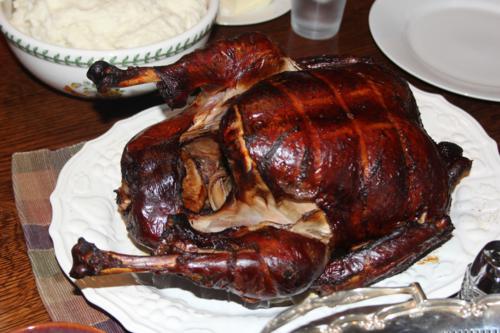 Okay, it’s not as pretty as the turkey from the smoker. But the meat is moist and flavorful and tasty beyond belief.

The first year I cooked both turkeys was the first time I’d ever cooked a turkey on the smoker. 4 people preferred the grilled to the smoked that year. 1 person preferred the smoked. The other 12 people abstained, saying both were delicious.

The second year, I made changes in the smoker procedure based on what I learned the first year. One person expressed a mild preference for the smoked turkey, out of 12, and nobody else was willing to express a preference. I didn’t have a preference this year either.

The third year, we have fewer guests, so I only prepared one turkey. I used the smoker. There were several reasons.